September 11 is a black day in American history…. September 11, 1941 witnessed one of the vilest foreign policy speeches ever given by a prominent American: Col. Charles Lindbergh’s Des Moines Speech.”

That is a direct quote from CFR’s website by James M. Lindsay. It comes from an article titled “TWE Remembers: Charles Lindbergh’s Des Moines Speech” written on September 11, 2012.

Leave it to a CFR member to conflate 3,000 American’s being murdering in cold blood on 9/11 and Col. Charles Lindbergh daring to speak rationally about an American-first policy during the war fever of FDR’s war party. In his speech Lindbergh suggested, in a round about way, that the FDR administration was building a New World Order on the ruins of Europe and US. 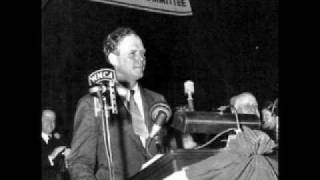 Wayne Cole, a leading historian of geopolitics, wrote, “no other noninterventionist speaker aroused such enthusiastic support as Lindbergh.”

…General Robert E. Wood, the chairman of the America First Committee, repeatedly sought to persuade him to take over the committee’s leadership precisely because of his unmatched fame.

While Charles Lindbergh gave his America First Committee speech on September 11, 1941, near the Potomac Colonel Leslie Groves put a spade under his foot and turned dirt in the ground-breaking ceremony for the Pentagon. Both events where on the same day, September 11, 1941.

According to the Wikipedia page for The Pentagon, “Ground was broken for construction on September 11, 1941, and the building was dedicated on January 15, 1943. General Brehon Somervell provided the major motive power behind the project; Colonel Leslie Groves was responsible for overseeing the project for the U.S. Army.”

In Barabara Maranzani’s “9 Things You May Not Know About the Pentagon” Maranzani writes about General Somervell’s concerns that as much steel as possible should go to America’s war effort. Lindbergh in his 9/11 speech calls it “..more appropriation for guns and planes and battleships.” This included that the Pentagon would be made out of concrete, as they couldn’t afford an ounce of steel to make the pentagon; in General Somervell’s mind all the steel at his disposal should go to guns and planes and battleships. Maranzani writes:

…the steel shortage already underway in a nation girding for war. Instead of steel, the building was built primarily of reinforced concrete, 435,000 cubic yards of it. Much of the filler for this concrete was dredged from the grounds around the Pentagon itself, including the Potomac River. Concrete was also used to build a series of ramps throughout the complex, which eliminated the need for steel-enforced elevators. Additional concessions to the war included the lack of bronze doors, plaques and any other touches that were deemed purely decorative.”

In the Pentagon there were no metal cables for elevators. It was built with ramps and steel-free golf carts were used.

Before he was even elected, FDR planned to build the Pentagon as office spaces for military personnel for the largest War the world has ever seen. FDR’s economic plan to get America out of the Great Depression was massive killing in Europe and bombing European treasure to dust. FDR’s “agitators”, as Lindbergh calls them, gave FDR his marching orders long in advance.

On 9/11/41 Charles Lindbergh was protesting what would be called World War II and the emergence of a Jew World Order.

Since joining the 9/11 truth moment I have heard chatter on many occasions about how the Pentagon and Twin Towers were made for the sole purpose of one day being knocked down, to bring the masses to the National Security Police State so the elite can have total control of their livestock.

Perhaps these buildings were not just office spaces for businessmen and Military personnel, but part of the engine to service the New World Order. I always wanted to believe these structures served the best interest, but I’m a skeptical person. The Masterminds of 9/11 saw to it that these monuments would be brought down, thereby psychologically bringing the American patriots, who revere these structures, to their knees.

Of course there is more to the trick for astute observers. 9/11 has numeric significance in Gematria, a form of Jewish mysticism. It is a pivotal tool in the way the elites plan major events such as 9/11.