At the Munich Security Conference on February 18, Israel’s Prime Minister Benjamin Netanyahu brandished a piece of fuselage from an Iranian Drone and chanted “don’t test Israel’s resolve.” The Iranian drone was shot down by an Israeli attack helicopter over Israel’s northern border last Saturday.

Netanyahu said at the conference that Israel “will act not just against Iran’s proxies that are attacking us, but against Iran itself.” The conference was also attended by Iranian Foreign Minister Javad Zarif.

Later that day at the conference, Zarif dismissed Netanyahu’s presentation of holding an unmanned aerial vehicle as a “cartoonish circus, which does not even deserve a response.” 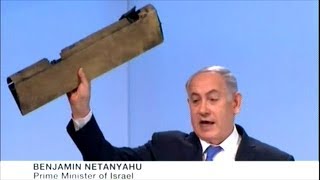 Zarif not only ridiculed Netanyahu’s speech, but even taunted Bibi about his police investigation for bribery. The hounds of hell are coming after Benjamin Netanyahu over corruption cases.

Bibi is acting as if the Israeli security apparatus wouldn’t function with out him. He didn’t reach into the sky with his bare hands and grab the Iranian Drone from the heavens. Bibi has been relegated to performing stupid parlor tricks in order to divert attention away from the scandals, even if that means using the psychological tactic of making himself look like a clown in a circus.

He used the same approach with the Wiley Coyote bomb diagram at the UN in 2012. 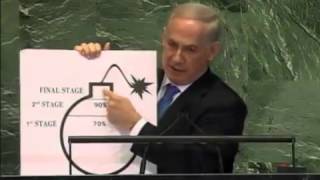