Skripal was until 1999 a colonel in GRU, Russia’s military intelligence branch, and later worked at the Foreign Ministry in Moscow. He was arrested and convicted of treason – for working as a double agent for Britain’s MI6 – in 2004, and released in 2010 as part of a spy exchange with the United States.”- Haaretz

Skripal was part of a Russian spy swap, which saw ten sleeper agents in the US exchanged for four people being held in Russia under espionage charges (one of them being Skripal and the other Anna Chapman)

Anna Chapman’s sleeper group was in the US to ‘build contacts with academics, industrialists, and policymakers to gain access to intelligence.’

Chapman was charged with ‘carrying out long-term, deep-cover assignments in the United States on behalf of the Russian Federation.’

Chapman, who runs her own label fashion boutiques in Moscow, is a mother of one, giving birth to a son in summer 2015. She has worked as a TV presenter on a show called Mysteries of the World for Ren-TV, a channel owned by National Media Group, headed by ex-Olympic gymnast Alina Kabaeva, 34, rumoured to be Putin’s secret girlfriend.

Now Chapman is back into the spotlight recently after Russian defector Sergey Skripal and his daughter were allegedly poisoned.

As ex-spy Sergei Skripal fights for life, one of the spies he was swapped with in 2010 – flame-haired Russian agent Anna Chapman – shows off her figure on a beach in Thailand… She has yet to comment specifically on the alleged poisoning of Skripal, a man who has been branded a ‘traitor’ and a ‘bastard’ on state TV in Russia. He was blamed for handing over some 300 names of Russian GRU agents or intelligence assets to MI6 for whom he worked as a double agent before his 2004 arrest in Moscow.

…Reports surfaced in 2014 alleging that Chapman had tried to seduce whistleblower Edward Snowden on orders from the Kremlin, according to a defector Boris Karpichkov, a former KGB agent.

Chapman’s mission to seduce Edward Snowden seem more like a TMZ mission than a creepy Kremlin top-secret mission from Moscow.  Look how the former Maxium model evades the question of “was  your proposal to Edward Snowden serious?”(In this NBC interview.)

Is Anna Chapman a made up persona (possibly a Snowman) to distract from Putin’s spies assassinating a father and daughter? Are people so shallow that they see a maxim model spreading her legs on the beach in Thailand and become totally distracted from a double homicide?

I hope you enjoy this video. 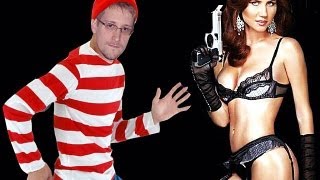