The GOP president of the United States sat next to gun-grabbing Israeli faux-Senator Diane Feinstein and stated it’s time to turn “grief into action,” in regard to modifying the second amendment to suit the demands of the liberal press and “crisis actors” like CNN’s David Hogg.

President Trump surprised many on “the right” by saying guns should be confiscated from potentially dangerous people, even if it violates their rights. “I like taking the guns early, like in the crazy man’s case. … Take the guns first, go through due process second.”

The Week reported that “Trump seemed to veer left on a host of issues, advocating for the Fix NICS bill, which would incentivize states to more thoroughly report information to the federal background checks database.”

Feinstein may have actually coined the phrase that AR-15s are “weapons of war,” which been echoed in the media after the Parkland Hoax.

The Los Angeles Times reported on the bipartisan meeting:

Sen. Dianne Feinstein shook with glee on Wednesday after President Trump suggested an assault weapons ban should be included in a bipartisan bill to expand background checks on gun sales.. .Feinstein, who sat next to Trump, went to the meeting armed with a letter to the president that argued for a new assault weapons ban. Feinstein told Trump it would be possible to include the ban in a bigger bill “if you help.” Trump then asked Sen. Joe Manchin (D-W.Va.) and Sen. Patrick Toomey (R-Pa.), the authors of the bipartisan background check bill, if an assault weapons ban amendment could be added to their bill, which has repeatedly failed to pass since it was proposed in 2013. “Are you ready, Joe?” Feinstein said, with a laugh. Manchin rubbed his eyes. Toomey laughed. “In my view, she can have an amendment … and then everybody can vote,” Toomey later told reporters at the Capitol.

The proposal made by Feinstein would ban assault weapons, and Trump’s support for that stunned Republicans in the room, many of whom have received large donations from the NRA.

Trump commented at the 1:30 mark that the press doesn’t say nice things about him, and that’s okay, but if they turn that energy to this bill then “I’ll love you.” How will the Alt-Right Pro-Trump shills spin this story? Or will they just ignore it?

According to Vox the 3 stated goals of Trump in this bill:

Trump insisted at the NWO gang’s diabolical roundtable that he could ban bump stocks via executive action. “You don’t have to worry about bump stocks, that will be gone,” he said, adding, “we’ll have that done pretty quickly.”

Trump is going to use his executive powers to completely ban bump stocks, he re-assured Feinstein. The Liberati and the RINOs, who are all Israel-Firsters, have a lot to celebrate about. The sheep are getting fleeced even more and the second amendment is going into the dust bin of history.

At the 38 minute mark Trump discusses his idea to ban certain content on the Internet and his strange relationship with the NRA. 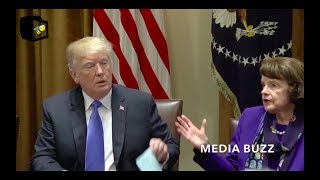 ..Following the meeting the NRA lashed out at President Trump, calling the extraordinary meeting ‘great TV but bad policy that would not keep our children safe.’ ‘Instead of punishing law-abiding gun owners for the acts of a deranged lunatic our leaders should pass meaningful reforms that would actually prevent future tragedies,’ NRA spokeswoman Jennifer Baker said in a statement to The Hill.

Please consider me on PayPal. Even a dollar or two helps me and let’s me know my articles matter. https://www.paypal.me/RollieQuaid

If you want a late Friday night live stream with Rollie Quaid, email me at 3301×3301@gmail.com. I need three core moderators to assist me in basic technical matters and help me figure out a platform. I don’t want to put content on YouTube just to get it removed.