The Central Intelligence Agency was one of the early backers of an AI startup company called Kensho Technologies, once focused on analyzing North Korean missile launches, earthquakes and elections – at least, until 2014. That’s when John van Moyland joined the company and its focus pivoted to finance, according to a new Bloomberg article.

S&P Global wound up buying the company last year and is now using it for yet another cause: developing the next generation of index funds. According to van Moyland, who’s title is now “managing director and global head of S&P Kensho Indices”, machines can design better indexes used as underlying products for passive investment vehicles like ETFs, which among other passive investment instruments, manage about $7.3 trillion in the U.S.

“We’re doing what a lot of research shops have done with humans in the past — and doing it at scale, in a highly predictable, highly automated, efficient way. Why would you ever limit yourself to aged financial data when there’s a sea of information out there?”

And so begins the race to create “robotic ETFs”, which are essentially a bet that humans would rather trust their money to machine-picked passive instruments instead of human-picked ones. The robotic instruments are created using “far-flung data digested with natural-language processing, machine learning and AI,” according to the article.

As of today, there are more than 2,000 ETF products on U.S. exchanges, meaning that every next one needs to stand out from the crowd more than the last. It’s also a catch 22 for some fund issuers: the money lost from people turning to passive investing needs to be made up in ETF fees, which can only be justified from specialized products. While a normal ETF collects fees of as little as $0.20 on every $1,000 invested, AI designed ETFs can justify fees as large as $1.80 to $8 on that same $1,000 investment. 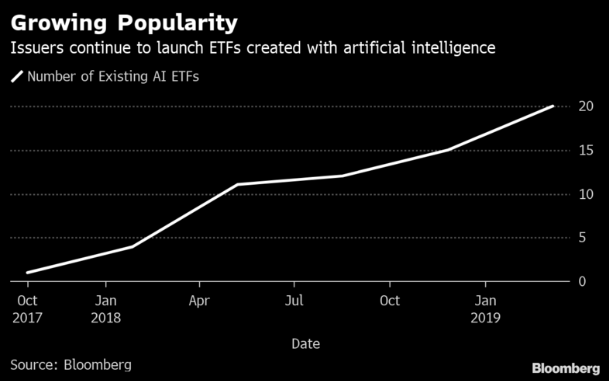 Kensho’s machines help S&P develop ways to identify relevant stocks. They capture all the ways an industry may be described while adding related industries to an instrument at the same time. For example, bots would combine stocks involved with self-driving cars and automated vehicles with the stocks of companies that deal in lithium batteries. Natural language processing is then used to help determine how to weight the index.

van Moyland is admittedly aware of these ETFs becoming more “marketing than substance”. He notes that these bots require “expertise and discipline if you’re going to produce a quality product.”

“None of this stuff is, you hand it over to a machine and you’re done with it. But increasingly you will see this machine learning, AI, whatever we call it, play an increasingly important role in the investment process.” 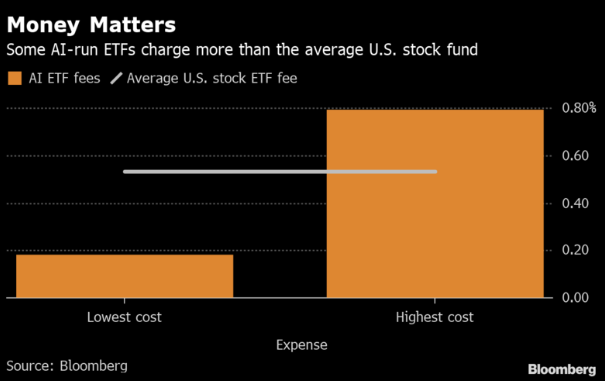 And of course robots are great at mining data where humans may not be. They are thorough, persistent and capable of processing huge quantities of information. At least 20 funds now claims to use AI as a building block. One AI-driven ETF has already shuttered after failing to drum up interest.

Art Amador, co-founder of EquBot, which runs two ETFs that use IBM’s Watson platform told Bloomberg: “A lot of times, institutions are saying that they’re using AI and really all they’ve done is automate some process. It takes away from everything we’re doing.”

Some hedge funds and robo-advisors like Betterment LLC and Wealthfront Inc. have been trying to use technology to undercut rivals. Now, well known and established companies like Blackrock are trying to follow their lead.

Jeff Shen, co-chief investment officer of active equity and co-head of systematic active equity at BlackRock said: “It’s an extraordinary and exciting time. Nobody really has completely figured it out yet. The time is now.”