DAOUD KUTTAB wrote:
“London-based daily Al-Araby Al-Jadeed recently published a cartoon, by the Jordanian artist Emad Hajjaj, depicting a faceless man wearing a red and white keffiyeh and sweeping his brown thobe in such a way that it looks almost like he is performing a magic trick. Whipped up by his movement, papers float around him. At the bottom of the frame, the hand of another man, wearing what appears to be a white button-down shirt, reaches up, apparently having let go of his pen in order to try to grab onto something, to save himself. The caption reads, “The disappearance of Saudi journalist Jamal Khashoggi.”” 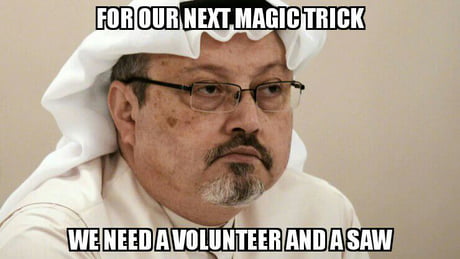 The strange case of Khashoggi did seem like a magic trick with bone saws, disappearances, box props and body doubles.